Smog takes its inspiration from the 1958 novella by the Italian writer Italo Calvino , with echos of his 1972 publication  " Invisible Cities " . In the 13th century court of the emperor Kublai Khan , The Venetian Ambassador and traveller Marco Polo is challenged  to tell us a tale of a city that speaks to  our futures ..."

Once upon a time, there was a small village called Battenberg, where it was always light and never dark and the villagers went about their daily business in joyful, uninterrupted brightness.

Surrounding Battenberg was a dark forest. In the depths of this dark forest lived Dr. Coppelius, the toymaker. He avoided this town of light and its inhabitants, preferring the dark and the company of his curious creations.

One day, however, darkness fell upon the village of Battenburg, creeping in from the shadows, and the mysterious Coppelius became their only hope …

In Arabia We'd all Be Kings

December 2013
In Arabia We'd all be kings chronicles the demise of a group of individuals living in New York's Hell's Kitchen. Out of work and strapped for money, the lives of these individuals revolve around a local bar and their misguided hopes and dreams. Performed by our second year Theatre Arts Students.

In July 1897 three Swedish adventurers set out from Svalbard, headed for the North Pole in a hydrogen filled balloon. Their aim was to discover new lands, to map the undiscovered Arctic and to plant the flag of Sweden at the pole. At 2:30pm on the 11th July they cut the anchor lines and floated up into the cold arctic air. They were never seen alive again...

Using an international cast and a delightful mix of projection, physical theatre, storytelling and live music, NIE invite you to join them on an exhilarating journey into a little known story from one of the worlds last great wilderness areas. A journey full of hope and daring do, of frostbite and patriotic songs, of seal meat and sharing a sleeping bag. A dream and a nightmare of the great white north. 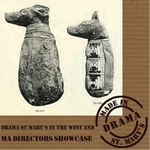 A lack of certainty about events heightens the dramatic interest, intrigue and general anxiety of this tempestuous new corporate power play for five women - Alex, Peterson, Mads, Joan, and the enigmatic Andrews. Business instability is high and confrontation with the enemy, Jeffries, is imminent. Trust has eroded and alliances are bought and sold as Joan, the new girl, is asked to ‘hold onto’ a set of files.